The 8th CoinGeek Conference heads to the big apple to showcase the latest developments on the BSV enterprise blockchain – now the largest public blockchain by transaction volume. “After so many years of just hearing about the promise of blockchain technology, it’s time to see some real uses and real value,” said Jimmy Nguyen, the founding president of Bitcoin Association, and the Conference’s host.

To show how non-fungible tokens are supported on BSV, and to celebrate the technology’s latest developments, TOAST produced a NFT Auction and Cocktail Party for CoinGeek at the New York City interior landmark Guastavino’s. This special evening was filled with cocktails, canapés, an auction, and engaging activations. As guests entered the venue, they were greeted by CoinGeek ambassadors and gifted BSV tokens to use during the event’s auction, which included pieces like a Franck Muller watch and celebrity NFTs. Activations included a wine tasting with Sommelier Carrie Lyn Strong, a live art installation with local artist Nicole Dana, My Intent custom jewelry making, and one-of-a-kind guest NFTs with Chic Sketch. Each activation displayed the possibilities of the blockchain technology.

Adrian Grenier, UN Environment Goodwill Ambassador and star of Netflix’s Clickbait and HBO’s Entourage, collaborated with artist Nicholas Forker to create a rare NFT, titled “Food Freedom,” for the evening’s auction. “I am really interested in continuing to learn as much as I can about the utility of blockchain, improving my understanding of the benefits and opportunities, as well as how that balances against the environmental impact. I am looking forward to increasing my understanding of BSV, its ability to scale and of blockchain, at the CoinGeek Conference,” he said. Also in attendance was model, actress, writer, and NFT backer Emily Ratajkowski. Her minted nonfungible token titled “Buying Myself Back: A Model for Redistribution” recently sold at auction at Christie’s for $140,000. “I’m interested in the NFT space as someone who has traditionally been unable to have ownership over my likeness,” Ratajkowski said at the event.

CoinGeek New York continues through October 7, 2021. Follow @aTOASTevent for behind the scenes views as we produce the the Sponsor & Speaker Social for guests to celebrate the culmination of CoinGeek’s New York Conference. 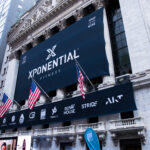