TOAST is excited to announce that our team will be part of Bill Murray and Guy Fieri’s virtual nacho competition, “Nacho Average Showdown” to benefit the Restaurant Employee Relief Fund. As eight million restaurant workers are currently unemployed, Fieri’s RERF works to provide financial assistance to industry workers impacted by COVID-19. One-hundred percent of donations go directly to the charity and ultimately to workers in the form of $500 grants. To date, more than 50 organizations have helped to raise over $22 million for RERF.

“My entire career has been in the restaurant business,” Fieri said. “From bussing tables to flambe captain to dishwasher to chef…I have done it all. I’ve also spent the better part of the last 15 years traveling this great country meeting other folks who’ve dedicated their lives to this business, and let me tell you something, they are the hardest working, most real deal workers you’ve ever met…the heartbeats of their communities. But they need our help and with the Restaurant Employee Relief Fund, we can serve up some support when these restaurant employees need it most…right now.”

Food Network’s Carla Hall will host and actor Terry Crews and basketball legend Shaquille O’Neal will act as judges in the live event. The duo will also be joined by their sons, Hunter Fieri and Chef Homer Murray, in the epic battle presented by Tostito’s.

“Nacho Average Showdown” will be live streamed on May 15, 5PM EST on the Food Network’s Facebook Page.

You can donate to the Restaurant Employee Relief Fund here. 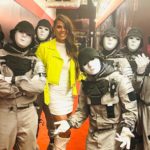